The 7 Wonders of the Ancient World 2.0 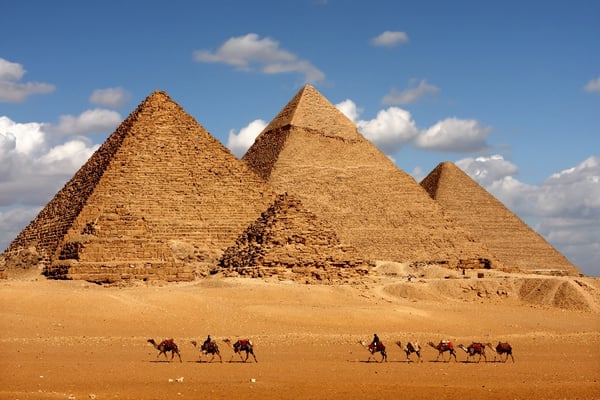 The Pyramids of Giza – a UNESCO World Heritage site – is the last remaining monument from the 7 Wonders of the Ancient World.

Although modern buildings and skyscrapers are looked upon in awe by passersby today, there have been several magnificent structures in the past that would outshine today’s architecture.

Known as the 7 Wonders of the Ancient World, these extraordinary constructions have inspired writers and artists over centuries. However, out of the 7, only one is still standing today.

What if these incredible structures had been built out of Fiber Reinforced Polymer (FRP) composites? Would they all still be standing?

In this post, we will take a trip to the past and recreate some of the most magnificent structures out of FRP composites.

The Colossus of Rhodes

Built by the Greeks from 292 to 280 BC, the Colossus of Rhodes was a glorious statue to honor Helios, the Greek God of the Sun. The task of building this monument was undertaken after the city of Rhodes successfully defeated Demetrius Poliorcetes after a year-long naval battle.

Standing 108-feet tall, the Colossus was about two-thirds the height of the modern-day Statue of Liberty. Although it was the tallest statue in the world at the time, it didn’t last for very long. In 226 BC, the monument was destroyed in an earthquake.

If the Colossus of Rhodes had been built with FRP composite reinforcements, it could probably withstand the impact of an earthquake. Due to the tensile strength and flexibility of fiberglass rods, these FRP composite profiles can hold up to the shock of a powerful earthquake.

While steel rods are too brittle and inflexible, FRP composite rods will allow for some movement to prevent cracking during an earthquake.

The Great Pyramid of Giza

Surprisingly, the oldest structure of the 7 Wonders of the Ancient World is actually the only one left in existence today. The Great Pyramid of Giza was built between 2584 and 2561 BC by the Egyptians to serve as a tomb for the Pharaoh Khufu.

Standing 481-feet tall, tourists can still visit the monument and even crawl through some of the tunnels to view Khufu’s resting place. What’s even more interesting about this structure is that the Pharaoh’s chamber was built with strategically placed air ducts that keep the room cool throughout the year. It has been described as a sort of ancient air conditioning system.

While the Great Pyramid still stands, much of the facade has eroded over the years. If the FRP composite facade had been created for the exterior of the pyramid, perhaps it would still look as good as new.

FRP composites are resistant to corrosion. The material does not decompose over time due to exposure to the elements, which makes it perfect for building long-lasting building facades.

The Hanging Gardens of Babylon

Built around 600 BC in Ninevah, Iraq, the Hanging Gardens of Babylon featured an ascending system of tiered gardens. Containing trees, shrubs, flowers, and vines, this mud-brick structure was commissioned by Babylonian King Nebuchadnezzar II for his beloved wife, Queen Amytis.

Quite homesick for the landscape of her native northeastern Iranian region, the gardens were created to make the Queen feel more at home.

While the destruction of the gardens is unclear, we do know that mud-brick structures will only last for so long. Subject to decay and decomposition over time, these rudimentary building blocks can’t be expected to last for centuries.

However, FRP composite reinforcements would have helped to keep a wonder such as the Hanging Gardens of Babylon intact for a very long time. Fiberglass tree stakes can be used to assist with the growth of saplings as well.

The Lighthouse of Alexandria

Built in 280 BC by the Greek and Ptolemaic Egyptians, the iconic Lighthouse of Alexandria remained standing until the 1303 Crete earthquake. This violent earthquake was estimated to be a magnitude of 8, and it caused a massive tsunami that wreaked havoc across the city of Alexandria, Egypt.

Constructed out of stone, the lighthouse stood 387-feet high and provided a clear line of sight out to sea for 29 miles. The remains were discovered on the seafloor in 1994.

As with the Colossus of Rhodes – which was also lost to an earthquake – FRP composite reinforcements would have gone a long way in preventing the destruction of the Lighthouse of Alexandria.

Since FRP composites are flexible, strong, and resistant to moisture, cracking, breaking, and corroding would have been much less likely.

The Mausoleum at Halicarnassus

Constructed in 315 BC in Bodrum, Turkey, the Mausoleum at Halicarnassus was designed as a tomb for King Mausolus of Caria. Designed by the Greeks, the wonder stood 138-feet tall.

Although it remained intact throughout centuries of conquests, the mausoleum was destroyed sometime between the 12th and 15th centuries by earthquakes.

It seems that there is a common theme in the destruction of many of the 7 Wonders of the Ancient World. Earthquakes are devastating and can leave cities in total ruin.

The Statue of Zeus at Olympia

The Statue of Zeus at Olympia was first built as a temple in Greece from 466 to 456 BC. The statue part of the temple was disassembled and reassembled in Constantinople later on. Somewhere between the 5th and 6th century AD, the Statue of Zeus was destroyed in a fire.

Originally created by the Greek sculptor Phidias, wooden planks served as the frame which was then covered by ivory plates and gold panels. Precious stones were also used to adorn the Greek God of Thunder.

However, the wooden frame was not only subject to rot and decay, it was also highly flammable. Wood burns relatively quickly, which is why most modern structures no longer use wood to build the framework.

FRP composite reinforcements serving as the frame would mean that the Statue of Zeus would probably not have gone up in flames.

The Temple of Artemis at Ephesus

Built by the Greeks and Lydians in 550 BC, the Temple of Artemis was created to honor the Greek Goddess of the Hunt. In 356 BC the temple was the victim of arson at the hands of Herostratus.

However, it was rebuilt in 323 BC and later destroyed again by the invading Goths in 262 AD. The temple is near Selcuk, Turkey and has been virtually recreated for period films over the years.

Plundering caused the temple’s final destruction. FRP composites are resistant to impact as these materials have high tensile strength and good flexibility. So, ransacking a temple that has been reinforced with FRP composites would be folly.

Are you ready to upgrade your buildings with FRP composite reinforcements? Get in touch with our experts at Tencom to learn more today.