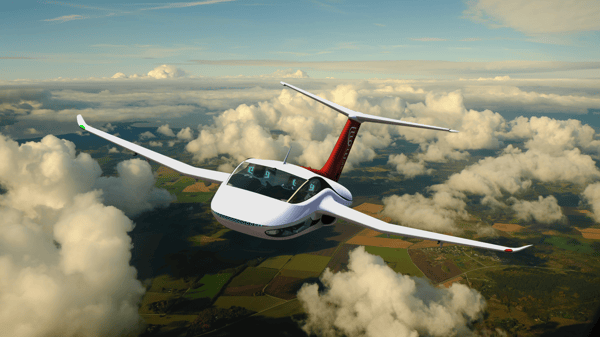 The hybrid-electric Q-Starling is a Personal Air Vehicle to take you from point A to point B. Pic Credit: SAMAD Aerospace

When it comes to modes of transportation, the use of carbon fiber is becoming increasingly popular.

We see it in supercars, boats, airplanes, and even bicycles. Generally, these products use carbon fiber components such as body panels, hulls, bumpers, and fuselages. There are a few bicycles that are made entirely out of carbon fiber though bikes are very basic and small compared to an airplane.

So, the question being asked today is whether or not an aircraft can be made entirely out of carbon fiber. The answer is: yes.

Human beings have dreamed of flight for thousands of years, but it wasn’t until recently that the dream was realized. Ever since the Wright Brothers took to the skies, innovative minds have been scrambling to design a wide range of aircraft for a variety of purposes.

Although it may seem like something from a science fiction film, flying cars or hovercrafts are not so far into the future. The minds behind SAMAD Aerospace have just developed a concept model known as the Q-Starling. This high-tech Personal Air Vehicle (PAV) is designed to take up to two people from point A to point B just like a car. The difference is that it flies.

The engineers took components from the best vertical take-off/landing aircraft and luxury sports cars to create the Q-Starling. Vehicles from Maserati, Jaguar, and Aston Martin were the inspiration for the cockpit design.

The most impressive aspect of this concept aircraft is the fact that it is made entirely of carbon fiber. Lightweight and incredibly strong, the Q-Starling provides optimized maneuverability and high-performance capabilities.

Using a hybrid-electric system, this concept aircraft is also environmentally conscious. Bio-diesel/ SAF powers the turbo-generator, and a large hover fan produces thrust once the aircraft transitions from vertical flight. Then, the turbo-generator acts as a turbo-jet during normal flight, and the wings and tailplanes use Reaction Control System fans to keep the aircraft balanced and controlled.

With Urban Air Mobility becoming more available to the public, the Q-Starling can be flown by pilots who have a Private Pilot License (PPL) with a modification. If you are unfamiliar with the structure of flight training, the PPL is the first level of licensure that a pilot can get. This means that learning how to fly the Q-Starling doesn’t require thousands of dollars’ worth of training. The pilot can bring along one passenger.

Looking at the all-carbon-fiber Q-Starling, you will first notice its size. It measures 26.5-ft in length (8.08 m), and it has a wingspan of 25.9-ft (7.92 m). If you thought it was going to be a tiny aircraft, think again. It’s actually quite sizable, which makes it even more impressive.

Besides building an aircraft completely out of carbon fiber, what is the goal of the Q-Starling? The creators want to design a personal hybrid-electric aircraft that gives the owners the ultimate experience in luxury and flexible mobility.

The Q-Starling isn’t the only aircraft to use FRP composites. However, it is the only model to be built entirely out of carbon fiber. Let’s take a look at some other examples.

First up is the Hill Helicopter HX50 rotorcraft. Although production began on this innovative transport craft back in 2007, it hasn’t gone into the testing phase yet. Using a FRP composite fuselage that improves the overall fuel efficiency, this helicopter is lightweight and has room for four people plus the pilot. It can hit a top speed of 161 mph (140 knots), and it can fly up to 10,000 ft.

Let’s also take a look at the Diamond Aircraft DA50 RG model. Featuring a state-of-the-art carbon fiber frame, this five-seater is lightweight and durable. It offers exceptional fuel efficiency, and it is resistant to corrosion and thermal damage.

Now it is even considered to be one of the safest private plane models available on the market due to its sophisticated design and FRP composite airframe.

Carbon fiber isn’t the only FRP composite material to be used in the skies either. In the UK, collaborators at Sheffield Hallam University have developed a specialty resin blend with polyfurfuryl alcohol (PFA) and other additives to created fire-proof fiberglass aircraft cabins. Furthermore, PFA resin results in bio-waste, which makes this product eco-friendly and sustainable.

Finally, we would be remiss if we didn’t bring SpaceShipTwo into the mix. Designed for space tourism, this FRP composite aircraft is unlike anything you’ve seen before. It has the unique ability to enter outer space and reenter Earth’s atmosphere without compromising the aircraft.

Recently, the SpaceShipTwo VSS Unity undertook its second glide test. Reaching a speed of Mach 0.85 from a height of 51,000 ft, this ambitious transport vehicle passed the flight test with flying colors.

Still considered to be a prototype model, the SpaceShipTwo journey has a long way to go before passengers can be allowed to take a trip into outer space. However, it is something that space and pultrusion enthusiasts have to look forward to in the future.

Benefits of FRP Composites in the Sky

Not only are FRP composite materials lightweight and durable, but they are also non-conductive, heat-resistant, and corrosion-resistant. Whether you use carbon fiber or fiberglass profiles, all FRP composites are safer and more reliable than conventional materials such as wood and metals. They also require very little, if any, maintenance and have very long life spans.

If you are looking to incorporate FRP composites into your next project, get in touch with our experts here at Tencom today.