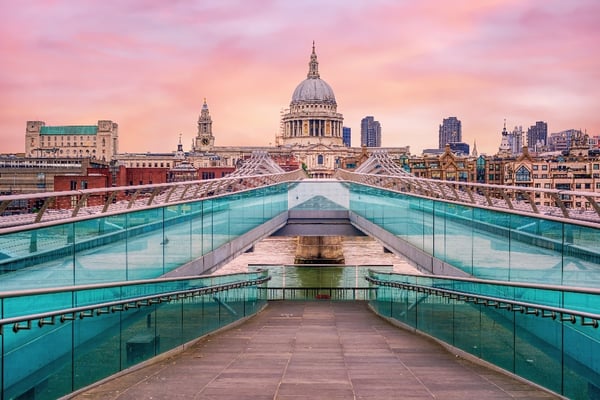 Having reliable infrastructure is one of the key components that keeps people on the move.

Roads, bridges, overpasses, and other vital elements enable people and commercial transportation to move to and from desired destinations with ease. That’s why it’s important to maintain certain building structures such as bridges.

Conventional materials like steel, concrete, and wood can be worn down over time, and they require quite a bit of maintenance.

Luckily, with the help of advanced Fiber Reinforced Polymer (FRP) composites, the lifespan of bridges can be extended. Let’s look at some examples.

Located in Sandisfield, MA on Route 57, the Rugg Bridge is a historical crossing point that was built back in 1938. Carrying travelers across the Clam River, this bridge has been a key part of the local infrastructure for decades.

In desperate need of repair, the Massachusetts Department of Transportation (MassDOT) undertook the task of rebuilding the decaying bridge. After receiving a $1 million grant to cover the cost of repairs, the decision was made to rebuild the bridge using FRP composites.

Originally built out of concrete that had been poured over a steel grid, the bridge deck weighed 60 lbs psf. While this was fine for foot travelers and horses, it has not been able to withstand heavy use. The deck itself was too heavy to hold up for much longer. A lightweight replacement was needed urgently.

Choosing to use a FiberSPAN bridge deck, construction began on the new Rugg Bridge. Steel stringers were spaced longitudinally along the 123-ft bridge and spaced precisely 6-ft-2-in apart along the center.

Next, the FiberSPAN deck was installed. FRP composite panels were used. Each panel measures 25-ft-11-in in width and 10-ft in length. They also all maintain a consistent thickness of 7-7/8-in. The fiberglass panels were then connected to the steel stringers via bolted shear studs.

The wear surface was made from black Matacryl also known as aluminum oxide. In total, the new FRP composite bridge deck weighs only 23 lbs psf. The finished bridge is now able to withstand loading conditions up to an 18-wheeler. This comes out to a wheel load of 16,000 lbs and an axle load of 32,000 lbs.

Other specifications include an environmental durability factor of 0.9 and a bending strain/shear strain maximum of 20% for a service load with a dead load. That is one very durable bridge.

The Rugg Bridge isn’t the first time FRP composites have been used to rebuild bridges. In fact, the folks over at MassDOT took inspiration from the Rocks Village Bridge rebuild in Haverhill, MA.

As the state’s oldest moveable bridge, the Rocks Village Bridge was constructed in 1883. The original structure featured a six-span truss design that swung to allow barges and boats to pass underneath with no complications.

The restoration of this vital bridge not only replaced old materials with FRP composite profiles, but it also added an extra 18,800 sq ft of driving space. Since its rehabilitation in 2015, recent inspections have shown that the FRP composite surface, span joints, and panel-to-panel joints are still like new.

The original Rocks Village Bridge consisted of timber, which was not aging well. Due to exposure to elements, the wood was beginning to warp and rot. Moisture damage had set in, and it became apparent that replacing the old timber with new wood planks would just lead to more maintenance in the near future. That is why MassDOT turned to FRP composites.

As a connecting passageway over the Merrimac River, the Rocks Village Bridge also featured original steel truss latticework on the outside. By cleaning and coating the steel components, this section of the bridge was able to be saved. Additionally, six new steel beams were added to the interior portion of the bridge for reinforcement.

FRP composites came into play for the bridge deck. A lightweight material was needed to retain the bridge’s ability to swing open to let boats pass underneath. This means that the deck needed to be as lightweight as possible.

Because of the length of the bridge, the original engineers had used uneven trapezoidal shapes to create the latticework for the deck.

With one end of the bridge being narrower than the other, the new designers had to create new, correct dimensions. They also needed to come up with a design that would support loads transferred from the guardrails in the event of an impact. This led to the engineers attaching guardrails on three of the spans on the bridge deck and other guardrails to the sides of the deck for optimized flexibility.

Once the bridge deck was complete, a polymer-infused concrete overlay was placed over the top instead of conventional asphalt. This was done to minimize the total weight. The finished FRP composite bridge now measures 809-ft long with a total deck area of 18,776 sf.

There are currently 54,957 historical bridges across the United States that require restoration. At the present, steps to preserve the bridges have kept them in passable working order. However, by replacing the worn-out components with FRP composite profiles, the bridges can be made like new again. They will also last a lot longer.

If you are looking for a way to restore your city’s local bridges, get in touch with our experts here at Tencom to learn more about FRP composite profiles.