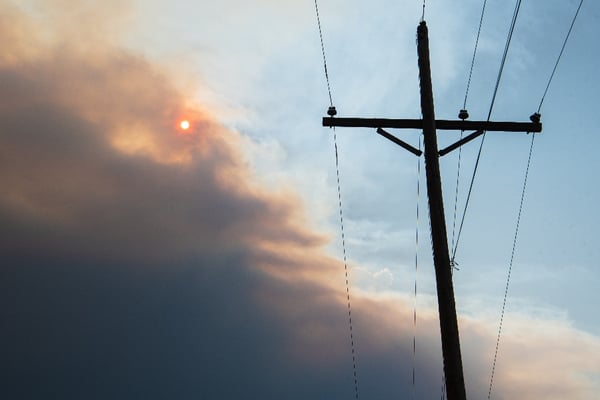 Here at Tencom, we love to talk about how fire-resistant our Fiber Reinforced Polymer (FRP) composite products are.

However, a simple discussion can only go so far to validate a point. So in this post, we will explore an incident in which FRP composite utility poles survived a controlled forest fire in Canada.

FRP composite utility poles are designed to withstand a great number of natural disasters including tornadoes, hurricanes, earthquakes, and strong winds. But did you know that they can survive forest fires too?

In an attempt to test out their new FRP composite utility poles, a controlled forest fire was set in the Northwest Territories of Canada. Meant to simulate a full-scale forest fire, these tests began back in 2011 under the tutelage of Mark Ackerman, a forest fire expert at the University of Alberta in Edmonton, Canada.

These tests were created to determine the performance of utility poles during fires without actually waiting for the next forest fire to break out.

Once the controlled fire was ignited, the scorching flames reached temperatures of 1,832 degrees Fahrenheit in a matter of seconds. The FRP composite utility poles were subjected to open flames for approximately 30 seconds before the fire moved elsewhere.

Although the poles were a bit charred, the structural integrity of the poles was not compromised at all. They were all just as strong and stiff as they were the day they came out of the pultrusion facility.

This controlled forest fire test validates that FRP utility poles are worth investing in. Sustaining very little damage, these poles have been proven to outlast wood, steel, and concrete counterparts.

According to the United States Department of Interior by way of the Insurance Information Institute (III), approximately 90% of all wildfires are started by people.

The most common causes include the following:

The other 10% of wildfires are ignited by lava or lightning. Even scarier, there are about 4.5 million homes across the country that are at high or extreme risk of encountering a wildfire. This information comes to us via the Verisk 2019 Wildfire Rise Analysis report. It also noted that almost half of those homes are located in California.

Let’s look at some recent statistics. According to the National Interagency Fire Center, there have been 48,858 wildfires across the United States from January 1, 2020 to November 6, 2020. Those numbers have increased from 45,244 in the same timeframe in 2019.

Comparatively, 8.6 million acres of land have burned in 2020 so far as opposed to 4.6 million acres in 2019. Out of the top 20 largest fires to occur in California, 6 of them happened this year.

California is a state that is subject to fires throughout the year. In 2020, 4.2 million acres of land have been burnt, 10,500 structures have been destroyed, and 31 people have died. These statistics are devastating.

Not only do wildfires wreak havoc on the land and buildings, but they can also cause massive power outages to people in the surrounding areas. Even if the fire doesn’t get close to a neighborhood, destroyed utility poles can affect the flow of electricity. This is why FRP composite utility poles are necessary.

Although they don’t work to halt the flames, they can withstand the heat.

Cleaning Up a Catastrophe

Wildfires leave immense amounts of damage in their wake. The result is millions, and sometimes even billions, of dollars worth of damage. Plus, the death toll and loss of wildlife habitat can actually change the course of the future for many species.

With the help of FRP composite utility poles, it is just one less thing to worry about during the clean-up process.

It costs a lot of money to replace destroyed utility poles. When wood, steel, or concrete poles are obliterated during a fire, this causes a problem with getting power to nearby neighborhoods.

So, on top of the expenses to replace all the poles, service providers are also faced with a time constraint. No one wants to wait for months while the company scrambles to put in replacement poles and restore power.

Plus, the other upside is that these new poles will not be harmed during the next wildfire.

Approximately 10% of forest fires are started by lava or lightning.

Lightning strikes are far more common than volcanic eruptions in the United States. Luckily for utility companies, FRP composite products are non-conductive. Not only does this help in the event of a lightning strike, but it also makes it safer for utility workers to check on the poles during bad weather.

Metal products are conductors of electricity. If lightning strikes a steel utility pole, it’s best to be a far away from the strike point as possible.

The most commonly used materials that are non-conductive are wood, rubber, and plastic. Wood is not ideal for utility poles due to its tendency to warp, rot, and decay over time. Exposure to the elements speeds up this process, and it’s not fire-resistant.

Rubber is fantastic for lightning-proof wearables. These can include shoes, gloves, and other items. But can you imagine a rubber utility pole? No, of course not.

If you need fiberglass poles or customized FRP composite products, we can help. Get in touch with our experts to learn more today.