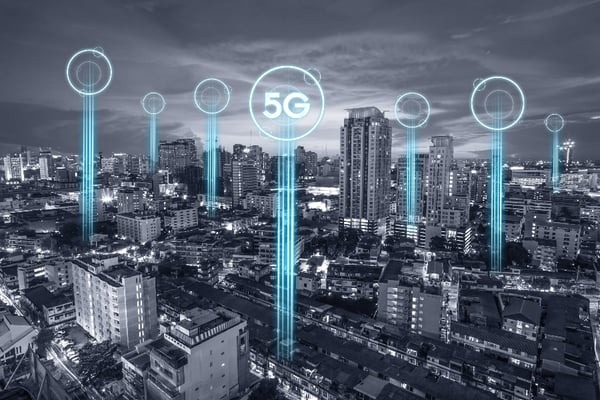 Smart cities are popping up all across the globe, promising to improve the quality of life for those living within city limits.

This has ultimately meant a massive overhaul to some of our oldest infrastructure, as governments as well as city planners and project engineers have finally decided to upgrade entire roadways, buildings and even subway systems to accommodate the integration of 5G networks and the Internet of Things (IoT) throughout.

In many instances, communications have been improved, utilities have become more reliable and transportation has become more efficient than ever before.

But, there are a few challenges.

For one, most cities aren’t able to carry out these projects as quickly as they would like. A complete overhaul could be quite pricey and many of these areas have been struggling to repair the infrastructure they already own – whether ravaged by natural disasters or by the natural degradation of traditional building materials once used to propel them into the modern world.

Communications have always been a major factor in remote territories across the globe. Recent efforts have been made to bring many of these areas up-to-date. Some cities and countries are gradually making a full return after massive power outages and downed cable lines.

As poverty plagues these cities, there’s less of a need for new technology if no one is able to use them. Funding for improvement projects may simply not be there.

A report published by the European Pultrusion Technology Association (EPTA) stated that, “An expanded role for pultruded composites in 5G cities,” projects that the rollout of 5G mobile networks in cities will propel the adoption of composite materials in city infrastructure.

In an article published by Inside Composites based on that report, Dr Elmar Witten, Secretary of  European Pultrusion Technology Association (EPTA) said,  “The need to ensure reliable 5G coverage in buildings and outside brings additional motivation for the integration of RF-transparent pultruded composites into urban design.”

Early adopters will see faster gains. Areas that are ready to invest are quickly finding that it will pay off to a much higher degree. By using pultruded products, they will be reducing costs on transportation, maintenance and durability.

Pultruded Composites as a Materials Standard

Communications are getting more stable and extending their reach. An article in Inside Towers recently spoke about the buildout and use of 5G, stating that “if cities are ‘smart’ they’ll likely use pultruded composites.”

It goes on to explain that, “By 2025, it’s estimated that the population in urban areas will increase by 70% with 5G services expected to be widely available."

With countless small cells needed to transmit the high-frequency 24GHz spectrum to power 5G in highly populated areas, composite materials can become the answer for concealment and more.

Pultruded glass fiber composite profiles are nearly ‘invisible’ to RF waves and have been used in telecommunications applications for many years.

Have you ever had an issue with your cell service while shopping for toilet paper? This tends to happen the further you make it into your local department store because you’re essentially surrounded by steel, concrete, aluminum and other materials that block telecommunications, preventing you from continuing your conversation.

The signal is dampened and the strength weakens the further you go away from the open environment.  Imagine a store with no walls. This concept is similar to what we will experience as more companies begin to adopt pultruded materials.

We break down the benefits of using pultruded composites over traditional building materials.  Up until now, most cities were content using steel, concrete and wood byproducts in order to build out their infrastructure.

Pultruded composites not only prove to be more reliable than traditional materials, they are more durable, kinder to our environment, easier to recycle, cheaper to transport and require less maintenance.

Pultruded products could be the underlying means towards innovating new cities, one city at a time. According to Lucintel, pultruded materials are one of most promising segments of the composites industry, set to make waves over the next decade.

In fact, the global pultrusion market is expected to reach an estimated $3B by 2023. By 2023, it’s set to grow at a compound annual growth rate (CAGR) of 4.1%, year-over-year. It will only continue to grow from there, as more and more cities transition into smart cities.

With FRPs, American manufacturing companies stand to take back a dying industry by adopting new materials and technologies as their primary source of revenue.

Over the years, there has been much discussion on the impact both the United States and Europe will play on the future of 5G cities and the standardization that stems from it.

By becoming a leader in this arena, the United States should also consider becoming the primary supplier and manufacturer for pultruded materials to the global marketplace.

Not every city is slated to become a smart city

This is true: not every city will become a smart city. But, it is also true that a majority of America’s infrastructure is in dire need of an upgrade, and there is talk that this will be happening very soon.

Cities that are not ready to become smart cities, can benefit if they use these lightweight materials for other infrastructure and telecommunication projects.

Should the government fund the overhaul of existing infrastructure, individual cities could sustain and even turn around any fiscal crisis that they may be facing. Even if there was no funding available, repairs would eventually be imminent. Using a cheaper, more durable material will make all the difference in the world.

With little to no need for ongoing maintenance efforts, less money would need to be spent on future manpower, maintenance and repair costs.

Each city would then have the freedom to decide how unused budgets could be re-allocated, especially if they wanted to take more subtle strides towards becoming just a little bit smarter.

As we brace for continued innovation, markets will constantly be on the shift. If you’re interested in learning how pultruded products can benefit your infrastructure or construction projects, contact us today.