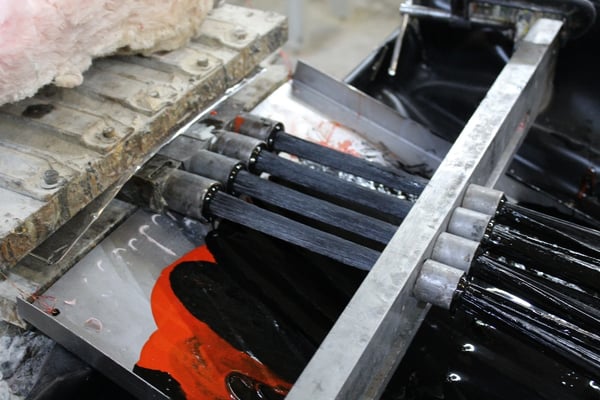 Vulcanized fiber was used as the casing material for the common one-time industrial fuses. This material was used as an enclosure for the fuse element serving as an arc quencher and burst prevention should there be a fuse link overload failure.

The pultruded tube ─ which was to be used for a fuse casing ─ was granted a patent. While other pultrusion companies also wanted to produce the same type of pultruded tube, they could not because of patent restrictions.

Subsequently, other fuse makers approached a pultrusion company in Ohio to make a casement for their one-time use fuses. To work on this project, the Ohio-based company hired an additional engineer to join their team.

Initially, the engineering team wanted to develop a tube with a woven fiberglass fabric to form the tube wall. However, the new project engineer Dave Green believed that a fiberglass continuous strand mat would be a better choice so he chose an alternate design. After some discussion with the project team, everyone was on board with the decision to proceed with the alternate design in the development of the casement project.

The tube which was used for fuse casings and fuses had to incorporate specific performance requirements. The resin formula had to be made fire retardant with enough Methyl Methacrylate (MMA), hydrated aluminum and other additives. The ingredients also had to serve as an aid in arc quenching.

The tube cannot have any porosity (pores in the walls). This is because when the fuse fails and there is high heat, the filler can melt and ‘escape’ through the walls. When failure does occur, the tube has to be able to contain the explosion of the fuse (burst strength).

The tube has to be round and straight, with a tight enough tolerance to provide for ease and success in the fuse assembly. There were a few other requirements that needed to be met:

The strict quality control procedure set up before, during and after, ensured that the pultrusion process proceeded smoothly and seamlessly.

A Pultruded Product In the Making

As the manufacturing set-up needed to be fast and exact every time, the process ended up with each tube size unitized with rails and lockdowns in the floor so that the tooling could be rolled in place, lowered onto the rails, and locked into place ready for string-up.

Aluminum heated die chases cast in a “V” shape were used so that the square dies would always be centered and aligned in case they needed to be removed and replaced.

Being new to market, testing was required to ensure that the customer had a statistically acceptable product. For the burst, each size of tube is fitted with a set of plugs that would fit inside the tube. Measured pressure is used to determine the burst strength of the tube. To do this, silly putty is placed between the plugs (within the tube) and measured pressure applied to the plugs, compressing the silly putty until the fuse casing burst.

To test for porosity, an external contractor with a small design and fabrication shop was contracted to make a testing device to use water pressure inside the tube to find any void. If water squirted out through the walls, it meant that tubes from that batch could not be used.

Dielectric and flame testing had established ASTM procedures that the project team could follow for these requirements. Exact measurements for the ID, OD and ovality were done with equipment that was available in the market.

The company had a German made mat cutter in (existing) use which was fairly accurate. However, it did not meet the specific needs of this project. Since that time, Collins Craft Fiberglass Corporation has produced a similar mat cutter that is widely accepted and has been copied by other companies for general use today.

As the mat width was a critical part of the equation, the project engineer worked with the external design and fabrication shop to design and make a new mat slitter. This was an unwind/rewind type with rotary (air engaged) knives for cutting materials to width. The newly designed mat slitter which can cut to a very accurate width with minimum scrap, was considered the best at cutting for materials for rolled goods.

In the 80’s there was work being done in resin injection for pultrusion. And although there were drastic differences between that injection system and the proposed impregnation system, the procedure worked.

However, when other companies tried to implement the impregnation idea to others, it did not work as they did not understand the internal profile requirements.

Since that time, when that resin became available, the designs have gone to other companies including polyurethane resin suppliers. Meanwhile, many pultrusion companies have since developed impregnation systems that work and there are now patents and designs easily found on the Internet.

Prior to this, Green (the project engineer) had done some simple experimenting. In the mid ‘80s, even though he was employed in the continuous lamination industry, he was extremely interested in conventional pultrusion. So, outside of office hours, he continued working and perfecting his own design for resin injection.

When Green returned to the conventional pultrusion industry, he seized the opportunity to put his designs to work in the Fuse tube process. This design varied from high-pressure injection system. Instead, he preferred a low-pressure Impregnation system that allowed the geometry of the impregnator and die to provide the required pressure to completely saturate the fibers. At that time, a high-pressure injection system that was used with European spun roving was already available in the open market.

As mentioned, a patent was granted for a pultruded tube for fuse casings. The company that held that patent raised objections to the sale of a pultruded product in the open market. Even though the construction design was different, they pursued the matter and filed legal objections.

The Head of Research for the accused company combed through historical records and found documentation stating that the non-patenting company had developed and sold samples of a fuse tube to the patent holder prior to the patent being filed. Apparently, they had taken the product and provided the samples to a West coast pultrusion development company to build them a machine and process to make the fuse casing tube. They applied for a patent by claiming that they had invented it. Subsequently, when the records were shown to the patent office and patent holder, all patent infringement complaints were dropped.

Once the patent issues were resolved and potential customers were convinced that the performance of the pultruded tubes is outstanding and dependable, many other companies decided to go into pultruded fuse tube manufacturing as well.

At a Quick Glance

Along the way to production, some interesting things happened. During production, the mats (especially those that had a very narrow width) would tear and stop. The mat can be reinforced by putting continuous rovings into the mat to increase its strength.

This had been done previously and although bonding fine roving to the outside did satisfy that need, it probably would not work well in this case. Other companies decided to make the mat with the rovings inside. However, this failed when the mat bond slipped even a little.

However, a procedure that worked included bonding scrim to the mat surface. This is because the mat had fibers that were both oblique and parallel to the length of the mat. This idea was patented though ultimately, the scrim-mat was discontinued.

A separate mat with a narrower width scrim carrier with more defined forming guides and sensors to react if a mat should stop was used.

Several years later, another company made fuse tubes based on the (same) concept of bonding a fabric to a mat. The process involved direct copying of the patent but was not considered enough of an issue then to be pursued.

If you are considering pultrusion for your next project, get in touch with our experts here at Tencom. We would be happy to provide you with a quote and answer any other questions you may have about our process and products.