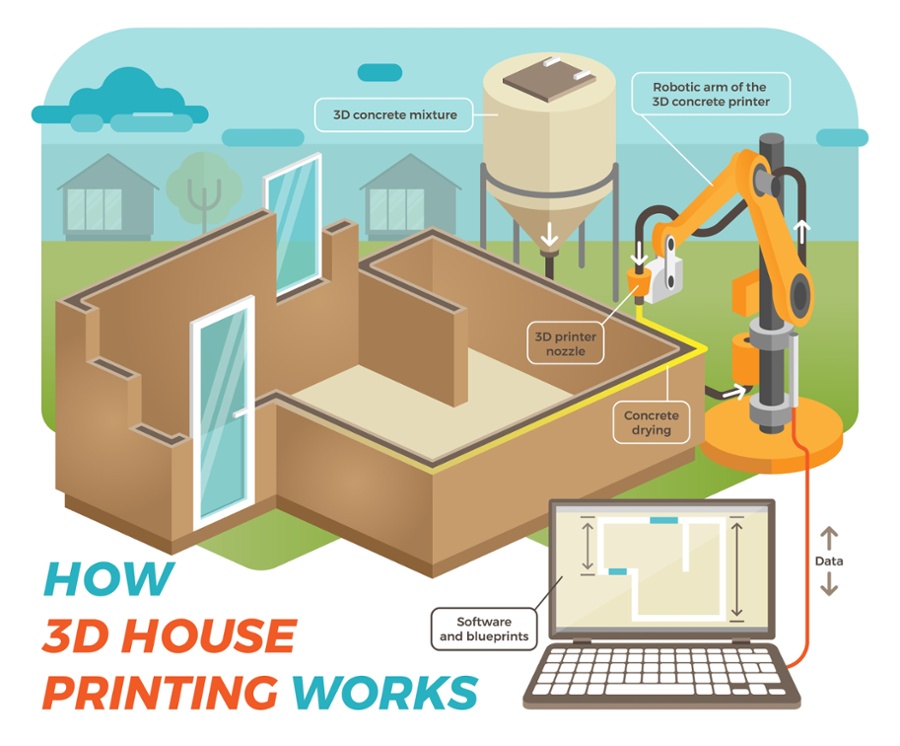 At the very end of 2021, news outlets all over the country reported on Habitat for Humanity’s recently constructed 3D printed house.

The organization’s mission is to help lower-income families achieve the goal of owning their own homes. They see 3D printing as a technology that promises to put that goal within reach of more people in the years ahead.

More broadly, many see 3D printing as an innovation with the potential to radically change the construction industry. We like to explore innovations in manufacturing technology in this space, so this week we’ll take a look at the 3D printed house. Read on to find out about the development of 3D printing construction, the technologies involved, and some of the advantages of this new method of building homes.

The Development of 3D Printing in Construction

Construction engineers in the 1950s started to think about ways emerging robotics technologies could be put to use in construction. An early idea was to automate bricklaying. It wasn’t until the very beginning of the present century, however, that serious work began on developing new techniques.

Pioneering work was done by a group at Loughborough University in the UK, who began to experiment with using 3D printing to build structures on a large scale. Enrco Dini, in Italy, was another early innovator who came up with a machine capable of printing structures using sand and a resin binder. Others were pursuing similar ideas at various places in Europe, the US, and Asia.

In the last decade, actual structures began to appear. Dubai opened the first 3D-printed office space in 2016. The building is limited in size — only 1 story and 2,600 square feet — but demonstrated the feasibility of using 3D printing in real-life applications. This was followed by a 3D-printed residence in Russia in 2017 and the initiation of an entirely 3D-printed neighborhood in Mexico in 2019.

In the United States, the first 3D printed house was listed for sale in January of 2019 in Riverhead, NY. It was a 1,407 square-foot structure that was listed for $299,999. That Habitat for Humanity house that received so much attention was completed in December of last year.

At this point, the industry looks to be gaining momentum. There are a number of companies specializing in 3D printed construction and many projects in the works. To explore two enterprises operating in this space and look at some of their projects, check out SQ4D and Alquist 3D.

How Is a 3D Printed House Made?

The typical method used in 3D printed construction involves a computer-controlled printing head that lays down thin layers of material, one on top of the other, to build up the desired structure. Different companies have been exploring various ways of designing the printing head itself as well as experimenting with different materials.

The Habitat for Humanity house, for instance, was constructed from extruded concrete. This is probably the most common material used at present. As the concrete layers are built up, rebar and other reinforcing materials are added to give the necessary strength to the walls.

On the other hand, a company in Italy has recently built an experimental home, called TECLA, using a composite mixture of clay, water, fiber from rice husks, and a binder. Though the material is very different, the method of construction was the same. A printing machine deposited thin layers of the material on top of each other to gradually build up the walls of the structure.

At this point, 3D printing is not able to yield a completed dwelling. Standard construction techniques are still used to finish off the 3D printed structure by adding mechanical systems (like plumbing, HVAC, and electric) and elements like roofing, doors, and windows.

What Are the Advantages of a 3D Printed House?

A reasonable question to ask at this point is why we should pursue this new technology. Is 3D printing superior in some way to the methods of home construction currently used? The main advantages advocates point to have to do with time and costs.

3D printing the structure of a home can be accomplished very quickly. The walls for the Habitat home, for instance, were laid up in 28 hours. The other parts of the construction process, of course, take significantly longer. For the Habitat house, the total time was 3 months.

Still, they estimated this was about a month less than it would have taken with traditional techniques. One 3D builder, Apis Cor, has the ambitious goal to be able to produce a 1,700 square foot house, move-in ready, in just 7 days. We’re not there yet, but there is every reason to believe 3D building techniques will continue to improve in speed.

What about cost? One of the areas of savings is in labor. In the case of the office building in Dubai, the contractor said they were able to cut labor costs by 50-80%. Materials can also be cheaper, depending upon the technology involved and the market conditions for traditional materials like wood. Overall, many expect significant savings over present construction techniques. The realtor for the home in Riverhead, NY estimated the construction costs were 50% less than comparable homes in the area.

Any technology that promises to increase efficiency in the home construction industry is especially interesting in our current housing climate. In the US, we are facing a shortage of available homes that Freddie Mac estimated in September to be nearly 3.8 million units. This shortage has been accompanied by rapidly rising prices that have put homeownership out of the reach of many.

If the promises of greater speed and lower costs for 3D printing pan out, the technology may be one of the ways supply can catch up with demand.

In other parts of the world, the need for affordable housing is equally acute. Mario Cucinella Architects, creators of the adobe TECLA house in Italy, see great promise in the ability to use cheap and readily available materials to supply housing for some of the poorest communities on the globe.

Your Partner in Innovative Design

We’re excited to see what the future holds for 3D printing technology in the construction industry. It is just one example of how engineers, designers, and manufacturers are continually developing innovative ways to more efficiently make the products we need.

At Tencom, we believe in the potential of pultruded fiberglass to be part of this process of innovation. We’ve seen how this material can solve engineering challenges and replace traditional materials for superior performance and greater value. If you’d like to explore what pultruded fiberglass might be able to do for you, get in touch today.